The lottery jackpot has continued to climb as you completed this module.  Now it is time to determine how likely you are to win.

Let’s first assume that you not only need to pick six specific numbers from 1 – 49, but you need to pick them in the correct order.  If this is the case, you know you need to use a permutation to figure out the size of the sample space.

is the possible numbers, which is 49, and

is the number of choices you make, which is 6.

This tells you that there is one way out of about 10 billion to win; your chances are not good at all. 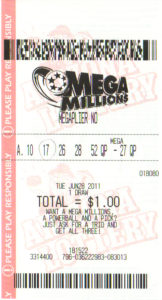 Fortunately, most lottery winnings do not depend on order so you can use a combination instead.

Notice that the sample space has been greatly reduced from about 10 billion to about 14 million.  So the likelihood of you winning is much greater than before, but still very slim.

What would happen to your chances of winning if you bought more than one ticket?  Suppose you bought 100 tickets and chose a different combination of six numbers on each ticket.  You could compare the number of tickets to sample space to determine your probability.

That’s much less than a 1% chance of winning.  Still not very good.  So suppose you gather up some cash and buy 1,000 tickets.

Okay, maybe you are ready to go for broke.  You and a group of friends gather your funds to purchase 1 million tickets.

Putting It Together: Probability by Gail Poitrast is licensed under a Creative Commons Attribution 4.0 International License, except where otherwise noted.