What you’ll learn to do: Describe the history of business ethics as a topic in organizational behavior 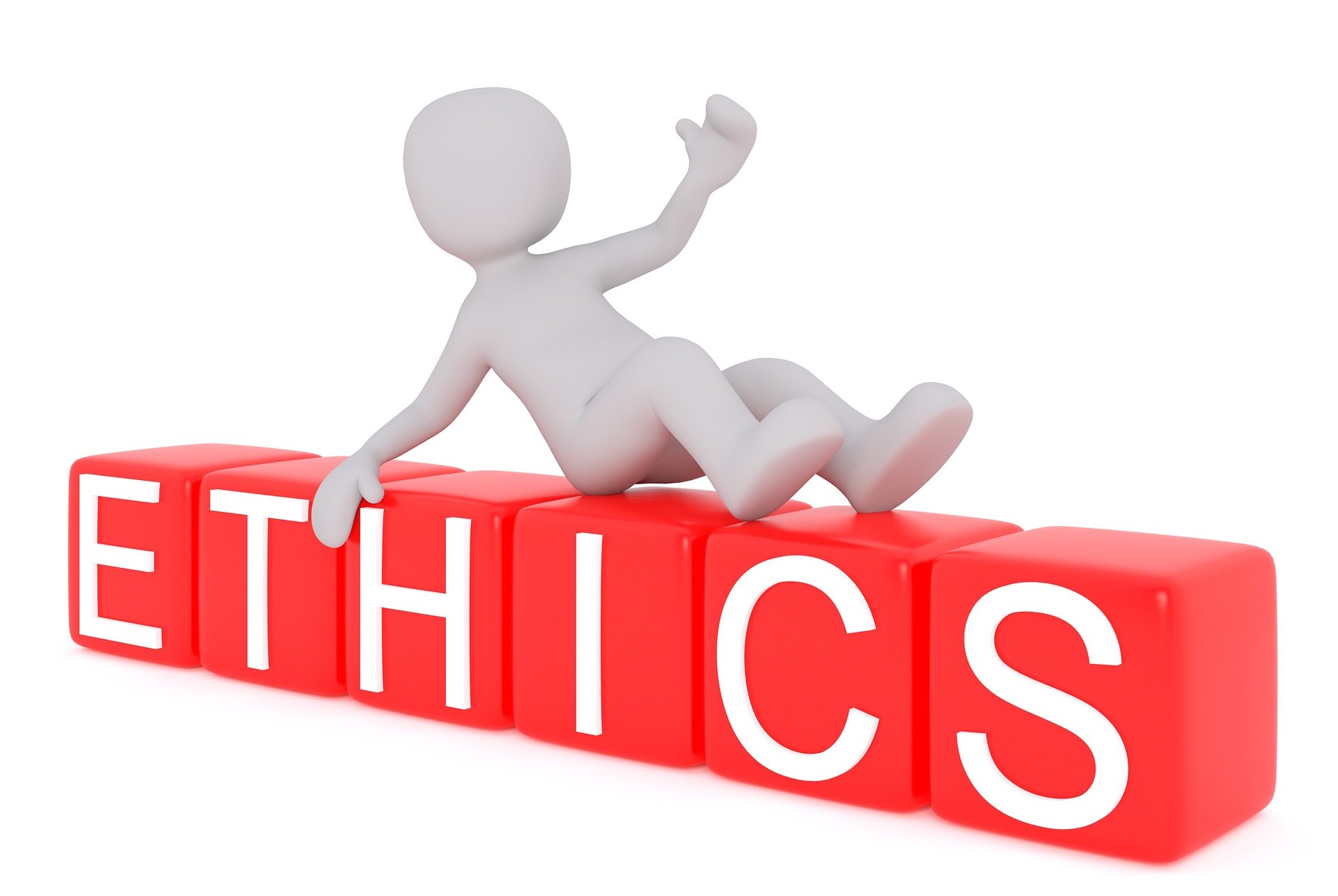 The term “business ethics” is not just a hot-button topic in today’s society. Instead, it has become an integral part of all successful companies. Now, more than ever before, business ethics are valued and examined on both an internal and external level. In the information era we live in, information about any topic is available at the click of a button. Thanks to easily accessible information, society can now hold companies accountable for their ethical behavior. Furthermore, millennials entering the workforce are searching for employers who operate responsibly and ethically.

What comes to mind when you hear the phrase “business ethics?” Many people associate ethics with following your conscience or the law. However, business ethics is a lot more complicated. Business ethics is not simply following the law or choosing to follow along with the status quo of other companies. Instead, business ethics are principles and values that guide how a company does business. Like organizational behavior, there is no exact time and place in which business ethics were created. However, there are historical events that have helped to develop each aspect of the term. Let’s explore some of these events and how they contributed to business ethics as we know them today.

Richard T. De George describes the history of business ethics to have blended together from different strands. He believes each strand represents a different yet equally important perspective on business ethics. Depending on what perspective historians have on the topic, will shift their version of history.[1] For the purpose of this section, let’s examine a few of the strands he has identified to ensure we get more of a “whole picture” perspective.

The first strand De George discusses is the one that can be dated back the furthest. “Ethics in business” as he refers to it, includes the history of moral standards used in business practices since the dawn of time. Instead of having a code of ethics like many companies do today, people centuries ago would still use ethical guidelines like the Ten Commandments or Aristotle’s economic relations philosophies.  Even after the fall of Rome, clear discussions of business ethics did not exist, however, there were many conversations about justly and honestly buying and selling good and services. Religious organizations used morals and biblical teachings to support ethical behavior, however, it was not until the mid 1900s that the term “ethics” or “ethics in business” was coined.

The next, and more recent strand De George investigates is the academic field of business ethics. During Vietnam, Americans became hypercritical of ongoing government and business operations. Big businesses were booming and the chemical industry was growing rapidly. These swift changes in growth drew a lot of attention and protest. People were concerned for equal employment opportunities and upset about the environmental damage caused by large corporations and the chemical industry. To help counter the protests, some corporations began to focus on a new term, social responsibility. Social responsibility was a term used by companies to help correct the error in their ways. If they were being accused of hiring discrimination, companies could then tell the public that they had a social responsibility to hire a diverse group of individuals. A company was accused of too much pollution? They can use social responsibility to change their impact on the environment and promote cutting back on harmful pollutants. Social responsibility differed from one industry to another since there were no set standards or descriptors in place to clearly define it. In the 1960s, social responsibility entered into the world of academia and is still a popular class in many business schools today. However, it wasn’t until the 1970s that business ethics as an academic field of study was born.

In the 1970s, scholars, theologians, and philosophers were all investigating the world of business. With the onset of so many new perspectives and ideas, the term business ethics was born. In November 1974, the first ever business ethics conference was held at the University of Kansas. The ideas and case studies discussed at the conference could be found in new business courses in the years to follow. Professors of philosophy and business alike were working together to fully examine and understand this new field. So what was the difference between social responsibility and business ethics? Business ethics were developed with a clearer set of boundaries and expectations. In addition, business ethics created more controversy within the business world than social responsibility did. Business ethics took a more critical approach to how companies operated and many argued that ethical decisions were outside of a company’s control. As we continue through this module, you will learn how companies actually can enforce business ethics and why it is so important and impactful to the success of their company.

Business Ethics in the Workplace

What is business ethics? In the simplest sense, business ethics is being able to identify the difference between right and wrong and then consciously choosing to do the right thing. Another way to define business ethics is written guidelines or standards used to hold a company accountable to moral actions and just decisions. Business ethics is an extremely valuable part of every company and can impact a company’s reputation and the community in which it serves. How companies choose to practice and enforce business ethics can differ from one company to the next, however, there is no denying that an ethical work environment is an essential key to success. This section will evaluate the role business ethics plays in the workplace and further explain why ethics are such an important component in business.

Professional ethics is the idea that individuals in their job field have extensive knowledge and experience which prepares them to work within certain industries. This training equips them to know business ethics standards for their line of work. For example, a doctor knows better than to violate HIPAA by sharing a patient’s medical information. And a teacher is taught to never be alone with a student. Neither of these examples may be something considered on a personal ethics level, however, they are expected on a professional level since their schooling and training has covered the information.

So what are some examples of ethical issues? There are a wide range of company policies, behaviors, and practices that can fall into an ethical category. Let’s explore a few of them.

If not handled ethically, each of these categories can have a harmful effect on the community and the organization. It is also important to consider how each individual within the organization can have an impact on a company’s reputation. Establishing a code of ethics and training employees to fully understand the importance of making ethical decisions is essential to a successful company. We will explore how to implement these things in the upcoming sections. For now, let’s move onto the next section to explore recent ethical investigations.

Ethical violations and investigations are ever present in today’s world. Unfortunately, not everyone learns from the mistakes of others which can cause history to repeat itself. In this section we will explore some business ethics scandals over the last 20 years, and what happened to the companies and people who caused them.

Enron was at the center of one of the most infamous ethical scandals to date. Enron was an energy trading and utilities company headquartered in Houston, Texas. For years, high level executives at Enron fabricated their books to hide massive losses. In 2001, the Securities and Exchange Commission (SEC) announced their investigation into Enron’s accounting practice. At the end of 2001, Enron filed for bankruptcy after their stocks dramatically dropped from $75.09 in February to $0.26 in December.

After their investigation, the SEC filed charges against high level Enron executives who knowingly manipulated accounting rules. The CEO and CFO were charged with 46 counts which ranged from conspiracy, fraud, money laundering, and insider trading. In the process, the Enron scandal also destroyed a large auditing firm, Arthur Andersen, who overlooked and helped conceal accounting inconsistencies and fraud.

Bernie Madoff had an extensive background in finance, even helped to establish the Nasdaq stock market and used this credibility to convince thousands of wealthy investors to give him their savings. Although he promised a high payoff, in reality Madoff was running an elaborate Ponzi scheme and cheated his investors out of $65 million. He was charged with 11 counts of fraud, money laundering, theft, and perjury and is currently serving his 150-year prison sentence. Madoff is infamous for the most expensive Ponzi scheme in history.

In 2012, Scott Thompson was brought on as Yahoo’s new CEO. Within a few months after he started his role as CEO, an activist group challenged Thompson’s credibility and qualifications for the job. After a quick investigation, Yahoo! learned that Thompson did not have a computer science degree as he claimed he did when he applied for the job. While this may seem like a little white lie, it was a brazen act of deception. Not only was it concerning that he lied on his resume, but it was equally, if not more concerning, that the board did not properly corroborate any of his qualifications. Thompson willingly resigned as CEO in May of 2012.

In early 2017, it was reported that Bill O’Reilly had paid off multiple women to keep them quiet about sexual harassment accusations. There were five women who were said to have been paid millions to keep quiet about any interaction with O’Reilly. Advertisers for the Bill O’Reilly show quickly pulled their ads from his show and 21st Century Fox removed O’Reilly from his position in April. Although O’Reilly and his show were canned neither O’Reilly or 21st Century Fox admit to any wrongdoing.

In 2017, Equifax, a credit rating firm revealed that it had been hacked and roughly 145 million people’s information had been compromised. To make matters worse, it was revealed that Equifax was aware of a system flaw that allowed the hackers to gain access to their systems. Even worse, they knew about the breach but waited two months before making it public knowledge. In addition, right before the breach was made public, executives sold around $1.8 billion in company shares. Since the scandal, many high leveled executives stepped down and there is still a pending investigation into insider trading.

Elon Musk, Tesla’s CEO, got himself into trouble with a tweet in 2018 claiming that Tesla had secured funding to take the company private. The tween explained that Musk was considering it and that the stock price would be $420 a share. This tweet was not accurate and the SEC began investigations with the idea that Musk’s tweets had the potential to sway the market. Both Musk and Tesla were each fined $20 million and greatly damaged both Musk’s personal and Tesla’s company reputations. After the scandal, Musk was removed from his chairmanship.

Alton, Larry. “How Much Do A Company’s Ethics Matter In The Modern Professional Climate?” Forbes. September 12, 2017. Accessed April 10, 2019. https://www.forbes.com/sites/larryalton/2017/09/12/how-much-do-a-companys-ethics-matter-in-the-modern-professional-climate/.

3.2 Business Ethics in Organizational Behavior by Graduate Studies is licensed under a Creative Commons Attribution 4.0 International License, except where otherwise noted.